For 20 years of my career, Southern Living magazine was 'the' resource for clients.  Most had pages dog-eared or torn out ready to show the garden of their dreams.  In return, equally, it was gratifying to reproduce those beautiful images.  Aside from reading Southern Living myself, for pleasure, I 'had' to read it because it was an expectation of clients.
.
Then came John Floyd's retirement in 2008, the editor for those glory years my clients adored.
.
After John Floyd, Southern Living became a magazine for Southerners written through the prism of those outside the South.  Dropped my subscription after an article that can only be described as snarky & demeaning, lacking in inspiration, choosing the trite & hackneyed, without intellect or stewardship, time enriched became time wasted.  How could they.  Get John back.
.
Oddly, another magazine had just been founded a year prior to John Floyd's retirement, Garden & Gun.  What a title.  It sputtered, as all businesses did during the debacle of 2008.  Time passed, about 5 years ago clients would start a sentence, "Did you see the latest Garden & Gun"?  Never was it about a garden, but someplace to eat, travel, or an article richly configured splaying open an epiphany, or two.  Three years ago, after buying a few copies on news stands, knew I had to get a subscription.  Zero disappointment.  However, the 'garden' part of Garden & Gun seems shallowly formulated, still in its infancy.  Don't care.  The rest of the magazine gives more than enough.
.
Saw a garden picture, below, recently and love it.  Enough love, had to discover its source.  Well, go team, Southern Living magazine.  Hope this spark turns into a fire and I get 2-3 clients saying, "I saw this in Southern Living...."

Just wow, above/below, simple, comfortable, easy to maintain, leveraging life, not sucking the life out of you trying to keep it up, and historically accurate.
.

The story gets better with this garden, above.  The Southern Living article includes the interior.  This is a second home for the owners, and part of their joy in this home is sharing it with others, whether they are there, or not.
.
Yeah, Southern Living magazine is back on the radar.
.
Garden & Be Well,   XO T
.
Oh irony.  Garden & Gun hired a lot of staff from NYCity, relocating them to the South at its founding.
Posted by Tara Dillard at 9:29 AM 5 comments: Links to this post

Temps & humidity are at their extremes.
.
Yesterday, after lunching with a friend in town, I had the good fortune of riding shotgun while my friend had to stop, below, for a few minutes. 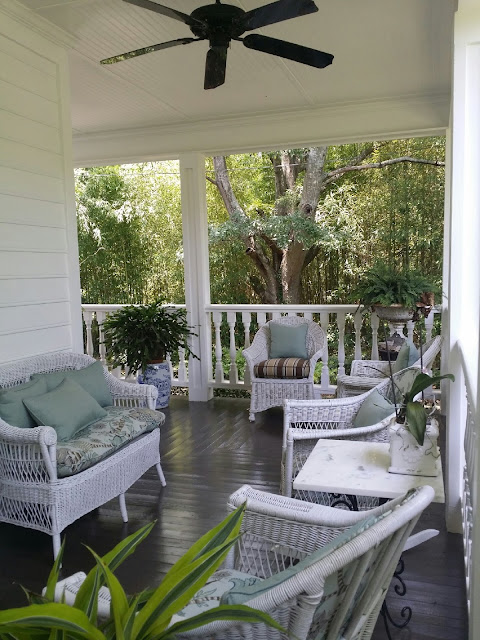 Without words, tone poem, this front porch is a full class, How to Design Your Front Porch. 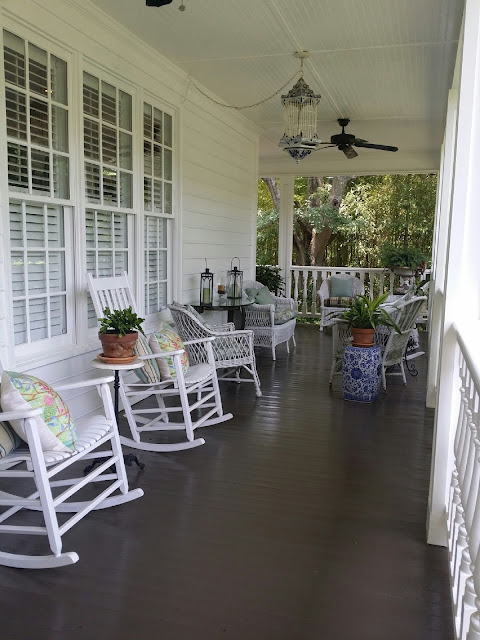 No incorrect note is played here.  Of course the Kimberly Queen ferns were showing off, but even the Christmas cactus was thriving.
.
I don't know the owners, yet, but you know I will.  Their front porch looks/feels like a fine spring day.
.
Will get the white they used for home/furniture, and sparkling gray on the floor.
.
Garden & Be Well,    XO T

Posted by Tara Dillard at 7:44 AM 10 comments: Links to this post

Words: Use with Caution in Styling

With some people, years ago, I learned not to share joyous news.  They took delight in diminishing my joy.  Another epiphany, not too long after, 'I choose the plants in my garden, choose the people in my life.'  Within seconds eject button pushed on several persons.
.
Lightening life's load was instant.  No regrets decades later. 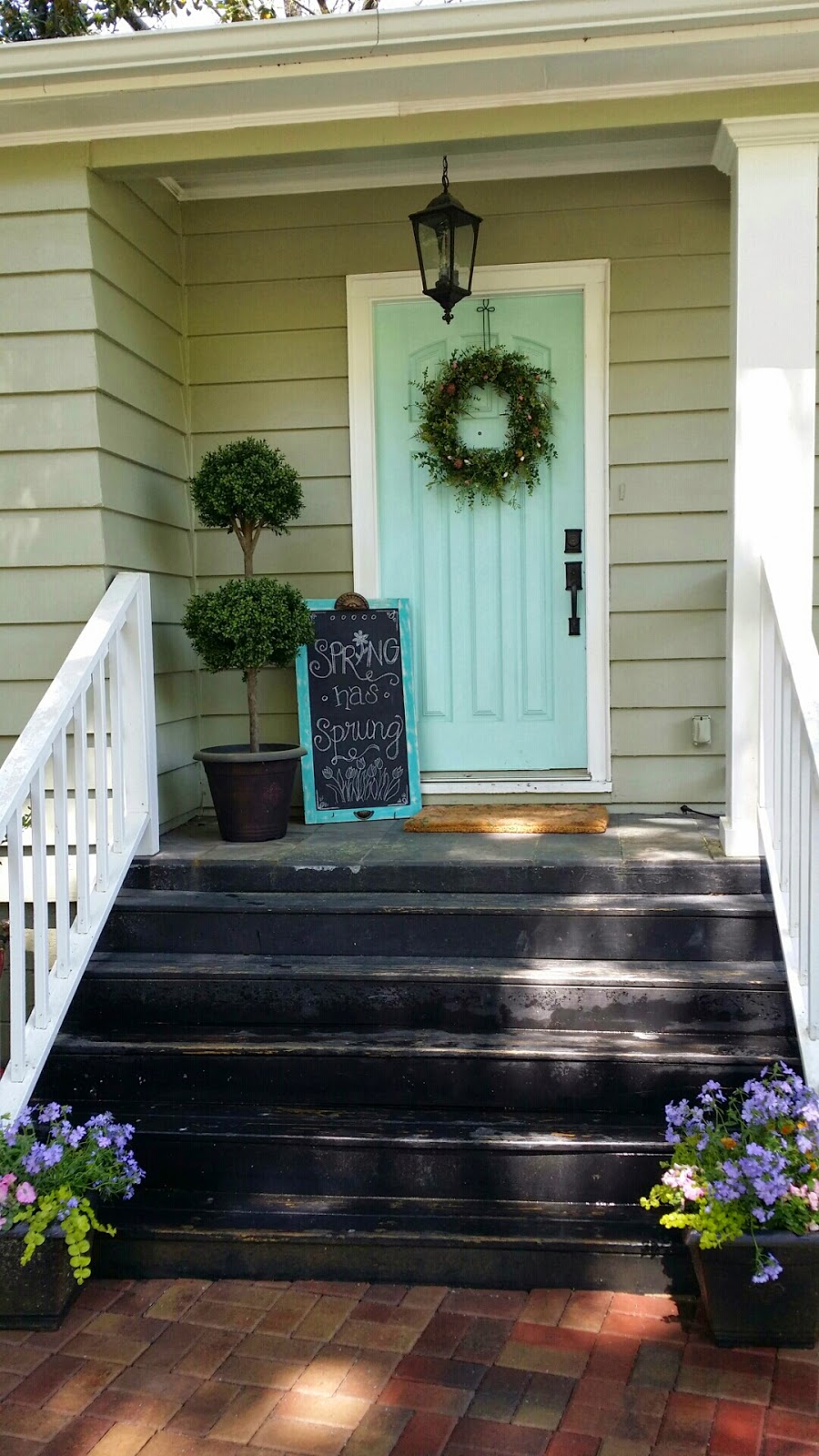 Words in the garden, be wary of using them.  Words, most often, dominate any mood, any narrative, weather, ephemeral delicate beauties, etc.
.
Gardens speak, without words.  It is the human cheapening their language.
.
Instead of admonishing with a picture proving my 'words' I've chosen an exception.  Words in a garden providing pleasure.  If my garden needs a sign, 'Spring has Sprung', do not ever, in a lifetime galaxy of black holes, hire me.  My garden decadently overflows spring's bounty.  Front door, above, is not my home/garden, it belongs to a young woman.  Her mom renovated/styled the home, to perfection.  'Words', included !
.
Love exceptions, and breaking rules.
.
Garden & Be Well, XO Tara
.

Posted by Tara Dillard at 9:48 AM 7 comments: Links to this post

Front Porch: Take that Rail Off

"Take the rail off", I said.  Friend, not client, we knew the obstacle, husband.  Years passed. Now, below.    Understand intuitively who took the rail off & built the new step? 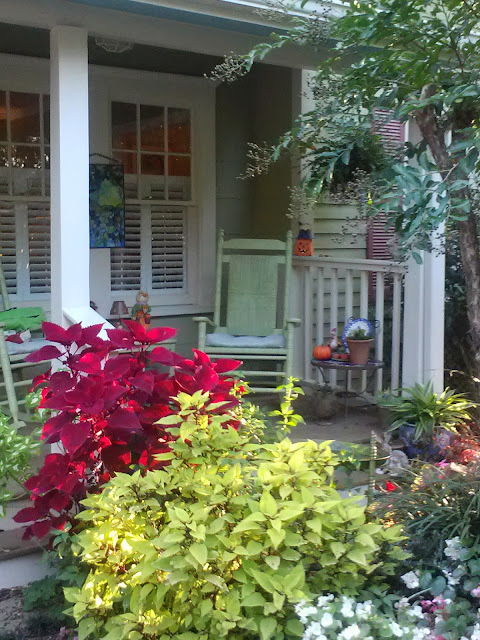 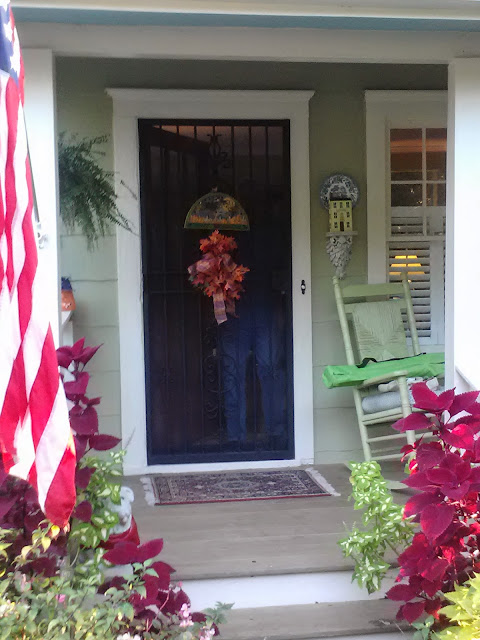 Ahead of the curve, they sold their lakeside mcmansion, and moved here, her childhood 2B/1 bath cottage.  When it's full of their 5 children, 15 grandchildren, & friends (lucky me) the house does not feel small, only unlimited horizons of love & joy.
.
"Will you ever bring a better gift for the world
than the breathing respect that you carry
wherever you go right now?"  William Stafford.  Gifting this lovely quote to my dear friend who lives in the cottage, above.
.
Garden & Be Well, XO Tara
.
Pics taken last week.
Posted by Tara Dillard at 8:13 AM 5 comments: Links to this post 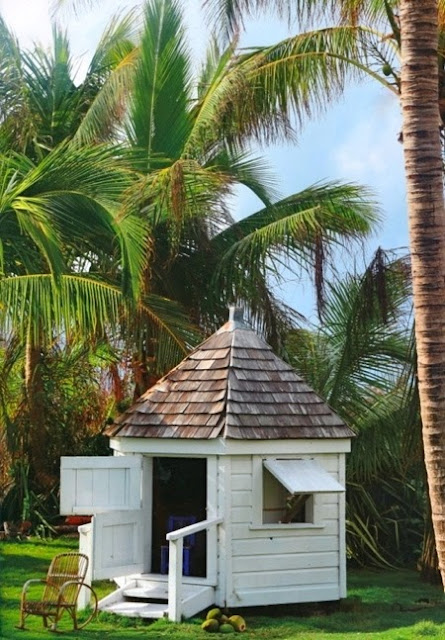 There is no 'architecture' at my home.  I've created my own.  The humble cottage. 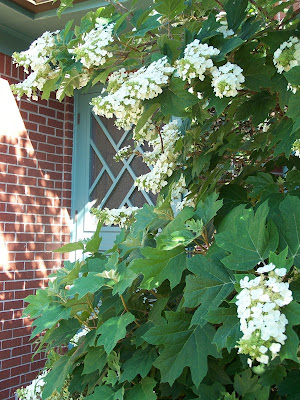 Instead of lipstick-on-a-pig with the front door.  I've left it as modest as the day it was built. 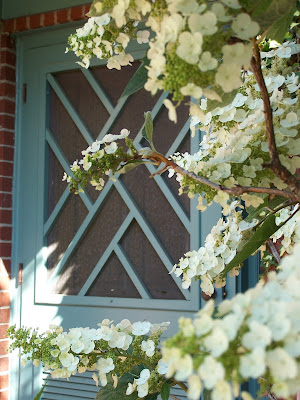 With only a hint of character.
.
Garden & Be Well,   XO Tara
.
Pics taken last week in my garden.  Before the garden I can remember disliking my home so much I would cry coming back from any vacation.  This is my starter home, here 5 years then off to something 'better'.  That was almost 3 decades ago.  If away for a night I cannot wait to get back and see what has transpired in the garden.
Posted by Tara Dillard at 6:40 AM 9 comments: Links to this post

Built during a poverty cycle, ca. 1930, this awning is wood. 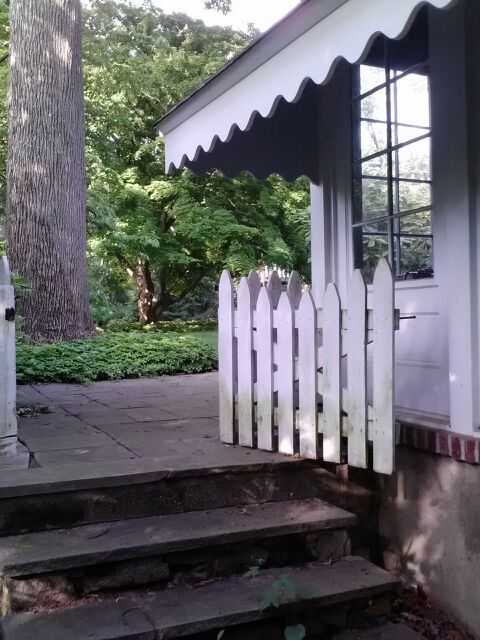 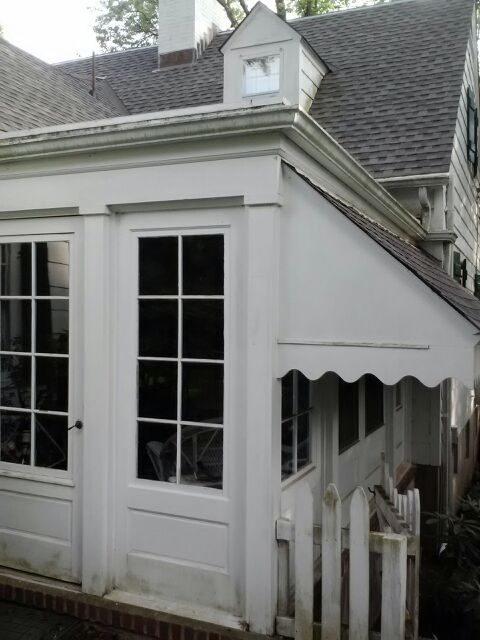 When the cottage was built, a century ago, this was the afternoon sun porch. 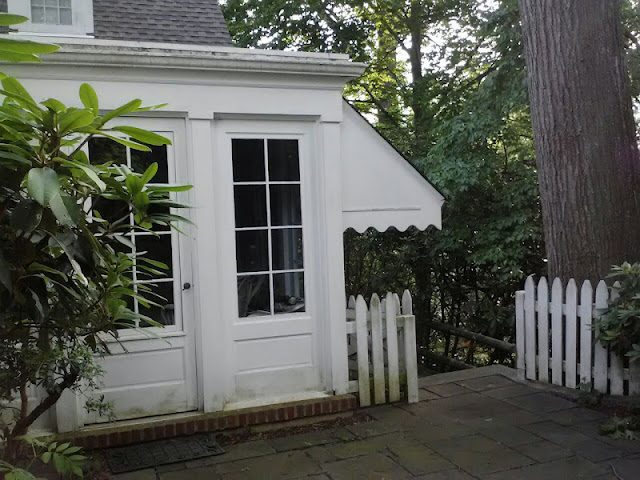 In love with the proportions (of all parts of this cottage).  They reek of age & fabulous.
.
Garden & Be Well,  XO Tara
.
Took the pics last month.
Posted by Tara Dillard at 8:07 AM 7 comments: Links to this post

How To Open A Front Porch

Gravel to the walls, evergreens (few), no rails on the porch, & a fabulous light, below. 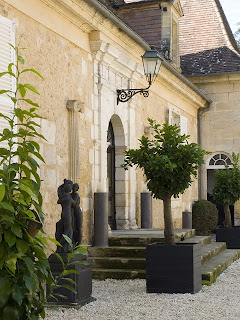 Exactly how I described The Cottage project, below, to my contractor.  Before I ever saw the pic, above, via Greige Design. 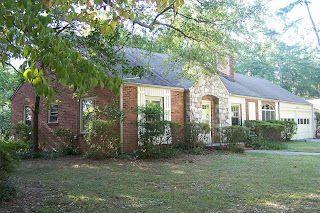 Porch rails will be removed, below, and stone steps added to all sides.  Foundation meatballs removed, 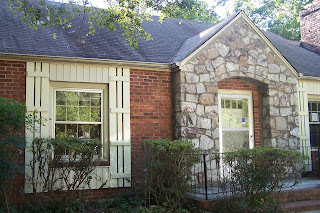 gravel spread, light fixture installed.  Bricks painted, shutters added to all sides (new color chosen) storm door removed and a potager nearby, it was requested and there is very little good light elsewhere.
.
Love this type of work.  Tight budget, big impact, little input.  Ironically, the biggest improvement will be removing the foundation meatballs.  The gravel?  Huge impact, and laughably one of the cheapest ingredients.
.
Garden & Be Well,   XO Tara
.
No use at present for the iron rail.  Cannot wait to discover which project NEEDS it !
Posted by Tara Dillard at 11:10 AM 4 comments: Links to this post 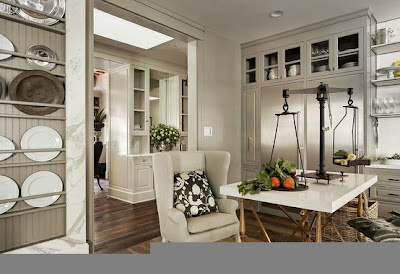 Tiny budget too.  A few days ago, inspiration via Greige Design, a bead board wall with plates, above.
.
The ANTICIPATION of creating the walls is palpable.  Using Benjamin-Moore HC Lancaster Whitewash with white plates and silver plated platters.
.
Soon, The Cottage will have a neo-butler's pantry belonging to a much larger estate.  It's dining room where the 'help' dines.  (Rather obvious I watched Downton Abbey last nite on PBS.)
.
Along with mission statement, narrative & back story inhabit this sweet project.
.
Garden & Be Well,      XO Tara
Posted by Tara Dillard at 10:39 AM 5 comments: Links to this post

Florida room, below, looking toward the front yard of a 1940 cottage. 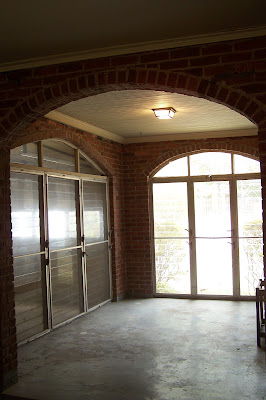 Florida room, below, looking toward the backyard. 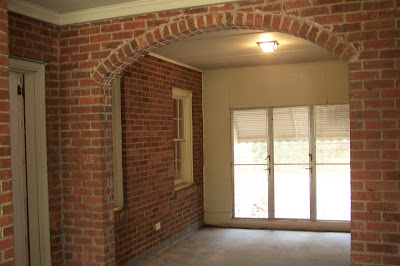 This cottage is The Velveteen Rabbit.  Life shows in her cracks & broken bits but it's obvious she's always been loved.
.
Friend & peer Sandra Jonas gustily laughed at my reference, 'Florida room'.
.
Whatever.
.
I'm calling it a Florida room.  What would you call it?
.
Garden & Be Well,     XO Tara
.
Pics taken last week.  Still in the design phase on this project.  Honestly, Sandra dahling,  these pics are for YOU.  Ha, the rest of you have already painted & stuffed the Florida room with furniture, art, sisal, new light fixtures.......  I love this phase.  Total possibility.
Posted by Tara Dillard at 11:10 AM 4 comments: Links to this post