“Be daring, be different, be impractical, be anything that will assert integrity of purpose and imaginative vision against the play-it-safers.” Cecil Beaton.
.
Younger, perhaps prior to age 6, I would have agreed with Cecil Beaton.  Everything he says about yourself, is for yourself.  Zero thoughts 'against the play-it-safers.'  They shouldn't enter your realm, they matter why?  Who has time?  Isn't the battle between lizard brain & heart enough?
.
Because I didn't like garden design rules, at the front end, I've created quite a few.  After intense study, in historic gardens across the globe, in addition to books/magazines/tv/movies/degree in horticulture.
.
What a knocker, below.  Broken, it's still marvelous.
.
Garden Design Rule: Overdose on a Theme.
.
Thrilling rule, you choose the theme.  Following it through, to the max, from macro to micro.  Seems obvious, and simple, but, trust me, you'll scare yourself at times.  Many nights, in bed, thinking, "Should I really do ______ , .........."
.
Wise advice I was given after sharing some night thoughts with a friend, "Never make a decision after sunset & before sunrise."  Quite liberating to be released from those chattering monkeys of the dark. Garden & Be Well,  XO T
.
In college for my engineering degree, test days in the classroom were hot.  Literally.  Summer/winter, both, hot.  Will never forget walking out of a thermodynamics exam, and the professor remarking how many more BTU's a working brain puts out than brains at rest.  Hence, the hot rooms.
.
I'd rather put my brain BTU's to good use, not waste a single precious unit proscribed to me during my short time upon this Earth.  Give a unit toward the play-it-safers?
Posted by Tara Dillard at 9:24 AM 1 comment: Links to this post

Ceilings are not high, below.  A transom was over the door.  I removed it and added a taller door & sidelights.  Creating more height,
I chose 2 panels + the upward curve.  Love the doorknocker Miss Florida found.  We did a lot of back/forth online with knockers & paint color & hardware. 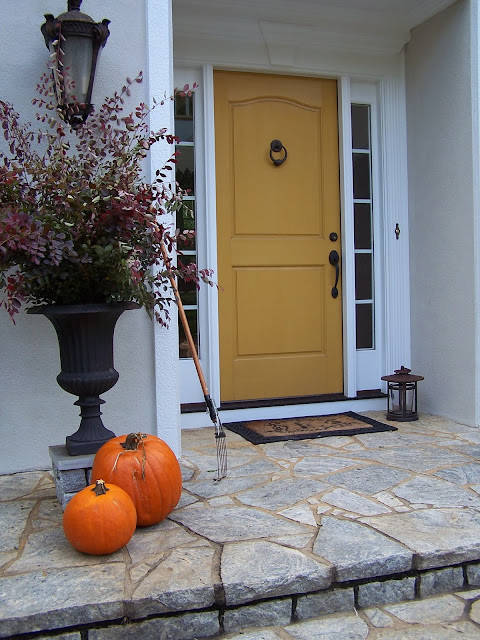 Urns fabulous enough to be empty were designed & plinths  for height adjustment.  Ironically, Miss Florida, who always says, I don't know anything, has consistently put in seasonal arrangements from prunings in her garden. 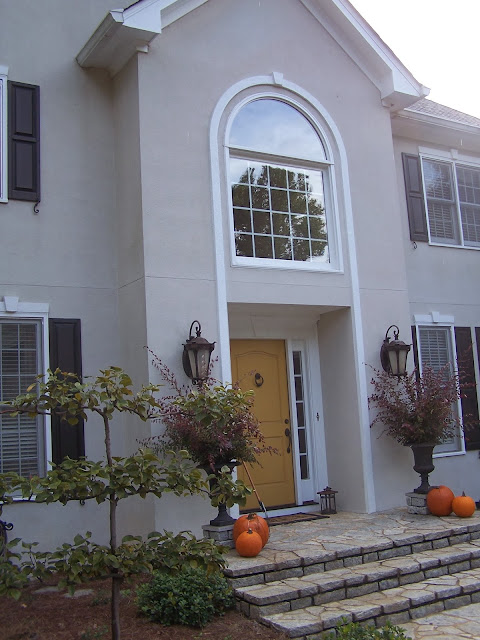 I also took away the foundation plantings, aka green meatballs, and used espaliered fruit trees + groundcovers.
.
The white is too white on the house.  Alas, it had just been painted before I was hired.
.
Garden & Be Well,   XO Tara
.
Pics taken at jobsite last week.  We are doing a new layer!  The drive, front woodland & upper arrival drive.  Cannot wait for the groundcovers to fill in, brown dead mulch, anywhere, has touched my last nerve.
.

Posted by Tara Dillard at 7:57 AM 6 comments: Links to this post

Contrasts are a potent tool in the garden. 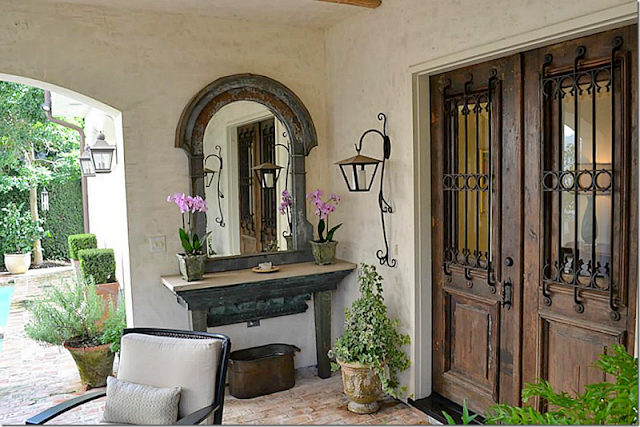 This mirror & curving lines of the light fixture balance the squares of the front door.  Exactly what I would have chosen.  And the scale of the frontdoor handle is pure sweetness.
.
This frontdoor starts the narrative of the interior.
.
Every front door has a narrative.  Whether the owner thinks so or not.
.
Garden & Be Well, XO Tara
.
Pic via Cote de Texas.  If the door were palladian then a square/rectangular mirror would be best.  Do not forget to use 'contrast' in your quiver of tools.
.
If you want a garden that is a moat of grace around your home & life, contact me..Details about online design services..Learn action steps to creating your best garden & home when you hire me to speak to your group..Details about lecture titles here..I've written several garden books available on Amazon.
Posted by Tara Dillard at 10:06 AM 4 comments: Links to this post 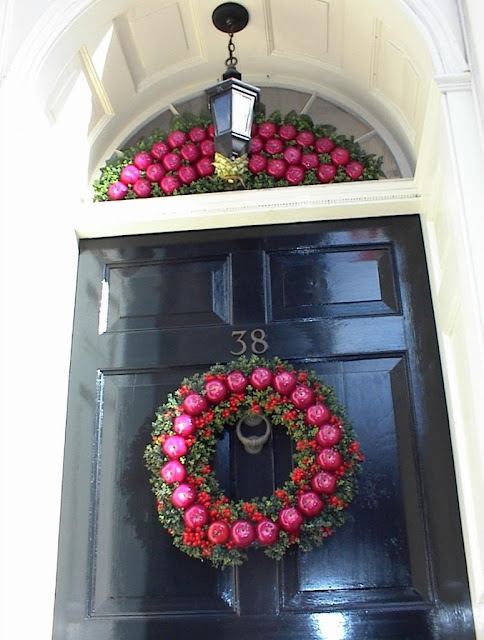 Sweetly scaled pendant light.
.
A front door is always a focal point.  When architecture & materials are already good why compete?  Beware 'too large' exterior lighting at your front door.
.
Garden & Be Well,      XO Tara
.
pic via DIY Home Staging Tips.  You'll love the link, it's the best tips of Home Staging for 2012.  Of course, too many decades of USA homes lack good materials/architecture, mine is one, so you want to consider the possibility of large exterior lighting.  Then, beware of lipstick-on-a-pig.
.
If you want a garden that is a moat of grace around your home & life, contact me..Details about online design services..Learn action steps to creating your best garden & home when you hire me to speak to your group..Details about lecture titles here..I've written several garden books available on Amazon.
Posted by Tara Dillard at 9:56 AM 6 comments: Links to this post 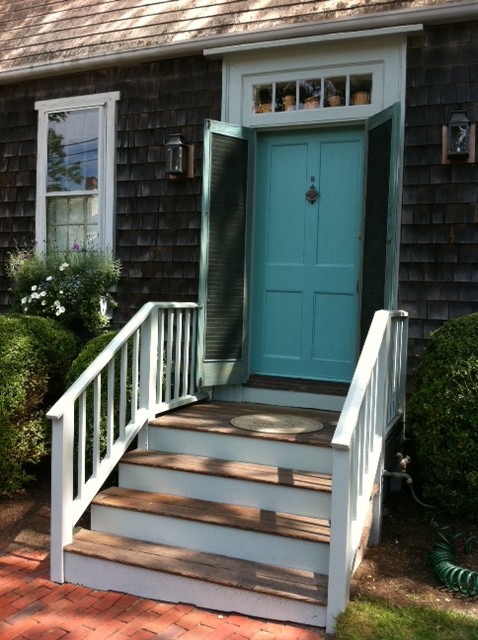 Boxwood disgracefully pruned into helmet hair, and wider at the top creating leggy hags with pockets of space at the bottom.
.
Coiled hose lingering for pride of place.
.
Blocks of wood anchoring exterior lights? Oh dear, at least stain them the color of the siding.

.
The delight of the sweet round doormat.   A great touch.
.
Charming vernacular baskets over the front door.
.
Adore the shutters open in welcome.
.
Why mulch when a groundcover is less maintenance & more lush?
.
Elegantly shabby seeing money stretched.  The steps/rails are solidly good and tell a story.  Windows are at a crossroads of rotting but surviving with storm windows attached.
.
The window box & front door paint color tell Puppet Barbuda she wants inside this sweet cottage.
.
Garden & Be Well,    XO Tara
.
A Cousin Cathy pic from Nantucket this summer.  This cottage reminds me of Aunt Tillie in her 80's, widowed & easily taking care of her brick cottage & garden.  Plenty of money but not one red cent to replace the furnace.  Smiling with a glint in her eye, "Let the next owner pay for it!"  Blessedly several of her antiques are now in my home & garden.
.
Who is Puppet Barbuda?  Landscape Design Critic of course.
Posted by Tara Dillard at 8:29 AM 6 comments: Links to this post 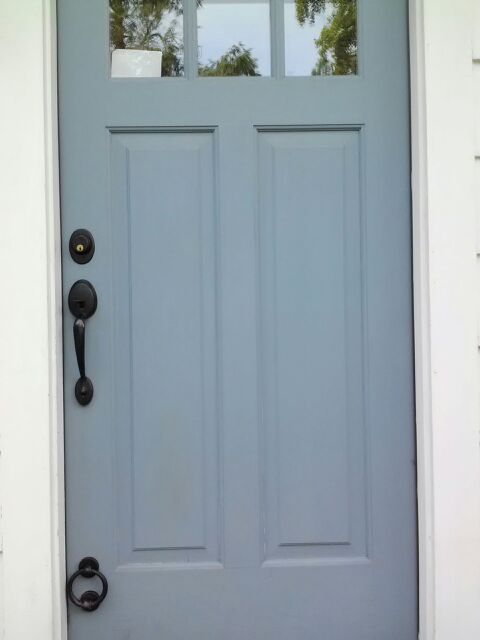 Posted by Tara Dillard at 7:58 AM 5 comments: Links to this post 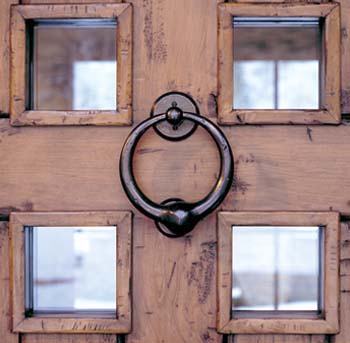 ready for a door knocker.  Above, her choice,  Rocky Mountain Hardware, E418 Round Escutcheon. 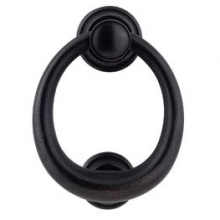 The Baldwin, above, was similar but a bit 'safe'.  You know, how Tina Turner starts Proud Mary.
.
Knocker, top, has character, depth, age, texture.
.
Garden & Be Well,       XO Tara
.
Every choice for a garden is nuanced.  Your garden?  The Baldwin might be THE one!  Remember: overdose on a theme, and, dinky is stinky.
.
Both pics via Door Hardware USA
Posted by Tara Dillard at 8:37 AM 1 comment: Links to this post