Mastering the Art of Garden Design: Not What You Think

At the front end of planning your garden, from personal experience, if there is a problem with the outcome, those problems reside in you, not the garden.
.
Assumptions about where to begin, "What plants will I have?", wildly, achingly, charmingly, sweetly, misplaced.  Going a step further, I did, decades ago, realized my initial assumptions beyond arrogant.  Worse, arrogance aimed at Nature.  There for me to wield.  Ha.
.
Before we have language, we see Nature.  For most that unspoken language, remains throughout life.  Seeing through a glass darkly, thinking as a child type of stuff.
.
Getting the horticulture degree, still, did not unlock the door to creating a beautiful garden, understanding Nature's language.  Off to Europe for decades studying historic gardens.  Designing/installing gardens all the while as vocation.  Dots on the Garden Design map emerged, some connected.  Map is not territory.
.
Having lunch at a client's farm, decades from my starting dot, standing inside her kitchen, looking through to the potager, a dot, outside the realm of Garden Design, appeared, and connected all the  dots.  The master dot.  Epiphanies are a drug of choice.  This one simple, seen since birth, yet zero comprehension for decades.
.
Providence never separated ornamental horticulture from agriculture.  Man's folly, made the separation.  Separation dot date?  Onset of the Industrial Revolution, late 19th century.  Until then we  lived with Nature.  The dot was clear.  Without it, death.
.
"The eighteenth century was the culmination of thousands of years of agrarian society.  The nineteenth century would bring in the Industrial Revolution to America.  Until then, most societies based their economies on the raising and trading of crops, so nature was always in control.  People measured the work day by the rising and setting of the sun, and one hailstorm or flood could ruin a year's work.  Everyday life was an ongoing struggle against nature.
.
Historically when people have been able to raise enough crops and food to sustain a comfortable life, they have challenged nature even further by turning their outdoor environment into a living art form, a pleasure garden.  Most societies have even given the garden religious significance.
.
A garden is a balance between measured, human control on one hand and wild, mystical nature on the other.  It is the place where humans attempt to create their particular vision of an idealized order of nature and culture.  A garden is not just the opposition of unpredictable nature and organized society; it is the mediating space between them.  Human intellect, intuition, nurture, and spirit meld together in a garden.  Since culture shapes both the form and meaning of a garden at a particular place and time....."  Barbara Sarudy, Gardens and Gardening in the Chesapeake, 1700-1805. 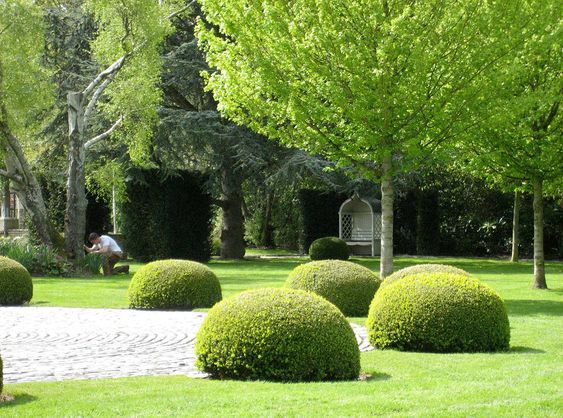 How little can you have in your Garden Design?  When I design a garden, the last question I ask myself, "What can I take away, and it holds together?"
.
Inside a garden, above.  Outside a garden, below.
.
Ironically, at every price point client, I'm told, "I don't want to spend a lot of money.  It must be easy to take care of."  These gardens, above/below.  Get it right.  Macro and micro.  Master dot.  Maximum pollinator habitat exists where hi density meets low density.  No, this garden isn't agriculture for man, it is agriculture for Nature.  Hence, us.
.
Feed the bees. Without them we perish.  Basic.  Simple.  Nature knows, we forgot.  More to this Nature 'stuff', Barbara Saludy alluded to it richly, above.  Cadence.  Will get to that another day. 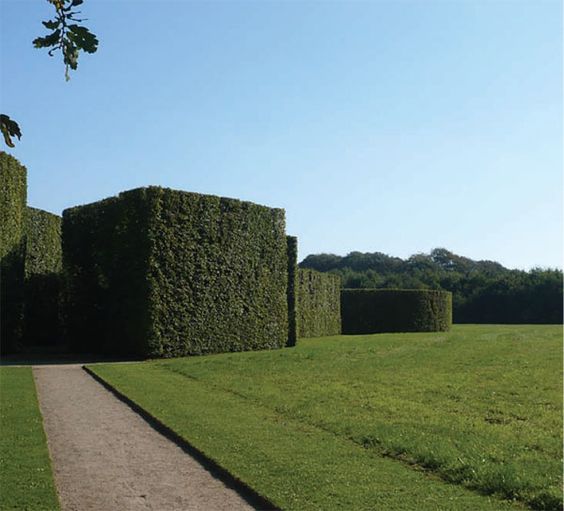 Pic, above, here.
.
One of the most potent Garden Designs you'll see, above.  Tara Turf, meadow mowed at differing heights, with a mix of plantings suitable to the zone, attracting myriad insects, attracting myriad mammals, (reptiles too, love my lizards), in turn attracting different genres of insects, mammals to the hedging and wild wood beyond.  Nature in full cycle, master dot included, high density mixed with low density.  While providing for property value increases, HVAC expense decreases, less maintenance, no chemicals, no irrigation.  Easily maintained with unskilled labor.  Of course the goal is to maintain as much as you can yourself, placing mind/body/soul into Nature's realm, Nature's cadence.  As long as you can.
.
Designing gardens, I design simple.  As requested.  After the concept plan, it's normal to receive requests for more 'stuff'.  Here's the negotiation.  Put this plan in first, if you want more later, easy.  Of course the final plan always includes a few of those extras.  If I don't put them in, the client will liberally dose the garden themselves.  Better to be like Barney Fife, Nip It.
.
With a proper garden design, epiphanies daily.  Epiphanies that will change your life.  How could Nature not do that for you?  Example?  It's almost fall, when the trees drop their leaves, baring themselves naked ahead of winter, they are being fed by what they let go of.
.
Meditate on that.
.
Garden & Be Well,   XO T
Posted by Tara Dillard at 1:07 PM 1 comment: Links to this post

A 'simple' Garden Design, below, all the layers dramatically in place.  Starting at the top of the picture, now, in your mind, label each layer of the Garden Design, below.
.
If you've come to Garden Design, age 50 up, this type of Garden Design holds significant charms vs. coming to Garden Design in your 20's.
.
But I'm getting ahead of my story, most of us come to gardening, if we do come to gardening, as the song noted, 'In a heated rush'.  And, 'Seeing what you wanted to see'.
.
Until Seth Godin a few days ago I taught garden design for beginners at the Atlanta Botanical Garden and local college, knowing my students needed to unlearn most of what they already knew about Garden Design, as beginners.
.
Garden Design appears easy, we try it, and the results prove Garden Design has a lot of elements not readily apparent, though beautifully designed gardens hide nothing.  Excepting. how can you 'see' the process of designing a good garden, how can you 'see' what was left out of the beautiful Garden Design?  Time to switch the narrative from what you thought you knew about Garden Design, as rank novice, to learning the nuts/bolts of real Garden Design.
.
Garden Design is not voodoo or feelings about what will work, it is science and art, a historical process, unchanged, since well before the birth of Christ.

"Narrating our lives, the little play-by-play we can't help carrying around, that's a survival mechanism. But it also hotwires our feelings, changes our posture, limits our possibilities.

The narrative is useful as long as it's useful, helping you solve problems and move forward. But when it reinforces bad habits or makes things smaller, we can drop it and merely be present, right here, right now."  Seth Godin
.
Exactly, the narrative we have as beginning gardeners, total novices, is our own narrative.  Limiting our possibilities, doesn't move us forward, literally makes our lives smaller.
.
Every historic layer of Garden Design, thousands of years worth, is, above.  Though it appears quite modern.  Bless good Garden Design for that.  It allows playfulness with abandon.
.
Thank you Seth Godin, now I know it's not the unlearning of our beginning Garden Design ideas we need to do, it's literally changing the narrative.  When we change the narrative, we change our lives.
.
Live a smaller life, never move forward, limit possibilities?  What's not to like about changing the narrative?
.
More than gaining a new narrative and ability to create an extraordinary Garden Design, the garden once built/planted will continually renew itself, with abandon.  What does that mean?  Once you've put the effort into building a beautiful Garden Design, the garden rewards you, no effort on your part, with a larger life, forward momentum, and limitless possibility.  And with some brownie points included, again without effort, raised property value, lower heating/cooling expense, easier maintenance & lifestyle.  Not bad, for changing your narrative about Garden Design.
.
So, have you named all the layers of the Garden Design, above?  Sky-ceiling, tall trees-canopy, small trees-understory, pruned hedge-walls, low meadow-floor, urn-focal point.  A garden room.  Plant it and you'll have a moat of grace around your home.  And life.
.
Garden & Be Well,   XO T
Posted by Tara Dillard at 8:47 AM No comments: Links to this post

What's the View from Your Porch Door?

Diffusing the view, Kimberly Queen, below.  Tolerates full baking sun or part shade, and she's not a shaggy mess unlike the Boston fern. 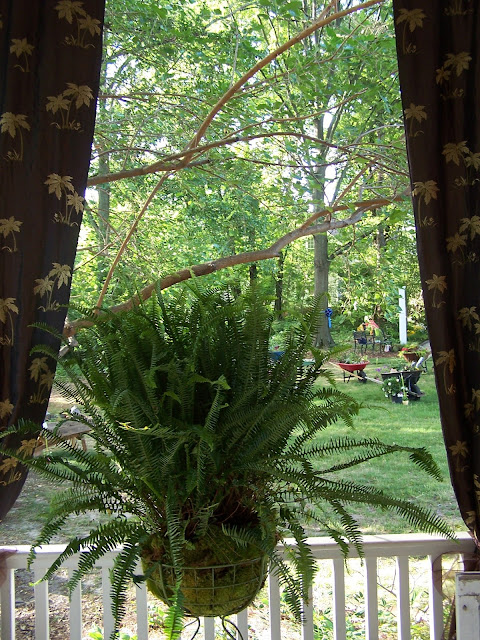 On perfect axis with the porch door, below, she diffuses the view in too.  Aka, double axis. 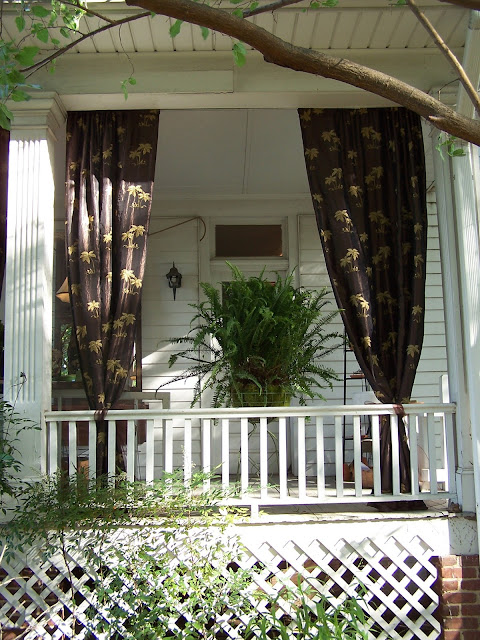 The lattice?  Regular, common, off the shelf, a disaster for any home but, in context, understandable here.  This home was rescued and is the Cultural Arts Center in Douglasville, Georgia.
.
Back to the lattice.  For pennies more special order panels with thicker wood slats, they look custom.
.
Garden & Be Well, XO Tara
.
The fern stand is real, and almost a century old.  Been decades since it held a fern.  Pics taken earlier this month at the Penny McHenry Hydrangea Festival in Douglasville, GA.
Posted by Tara Dillard at 7:56 AM 4 comments: Links to this post

Downtown Atlanta, below, a former cotton warehouse.  Swoon yet?  The Flying Buttress !! 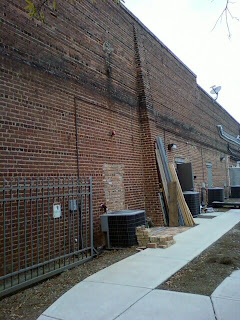 Copy.  It's the 1st rule of Landscape Design. 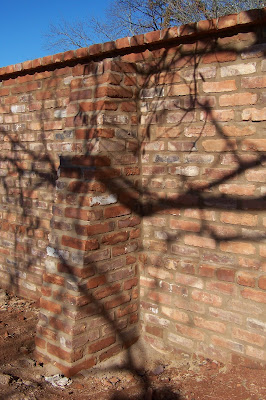 MY flying buttress, above.  Though it's on a client's property, and she did pay for the lovely bricks, ca. 1899, from Milledgeville, Ga, capitol of Georgia during the Civil War, and she did pay for the labor, and, and, and, honestly, I am in love with this Landscape Jewelry !
.
Garden & Be Well,         XO Tara
.
Orchard not complete yet.  Fruit trees start going in tomorrow.  Gates this year.
Posted by Tara Dillard at 9:28 AM 2 comments: Links to this post

The Walls Of Your Rooms

Landscapes ARE architecture. Begin creating architecture in the landscape with ceilings, yesterday's post, then walls. (My Tea Olive Terrace, below, along the side of my home.) 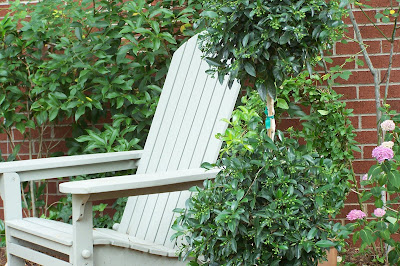 Landscape walls can be the side of your home, above, or all plantings, below. (Wall, below, is mine & hides the neighborhood from my tender sensibilities. What me not living in the Cotswolds?) 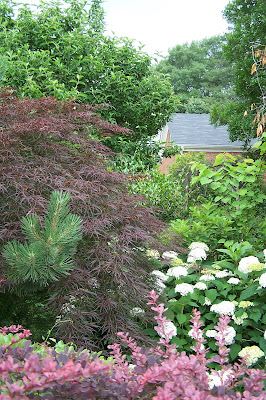 Espaliered woody shrubs & vines dramatize the walls of a home, fence, dependency & etc., below. (My Bay Terrace, below.) 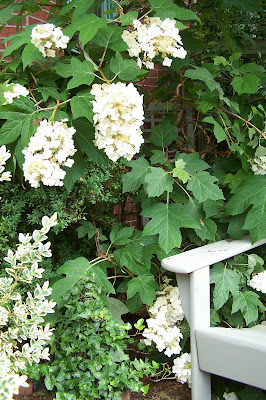 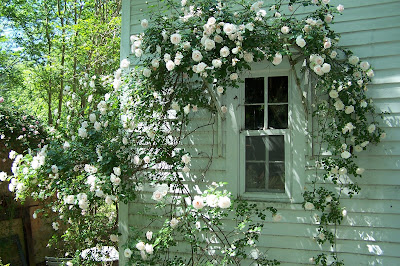 With more wit, intellect, & drama she created a garden room, raised on a dais (aka deck, but dais is ever so much nicer, yes?), 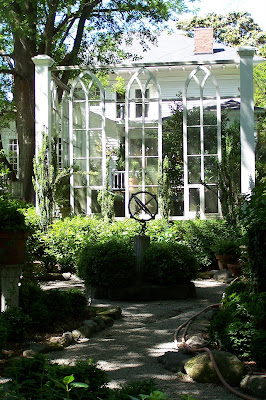 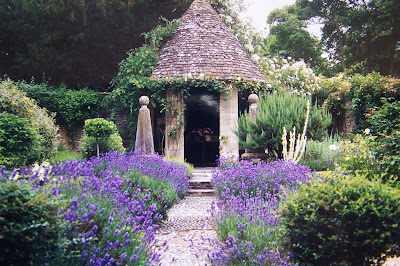 Landscape Design: create walls.
.
Garden & Be Well, XO Tara
.
Slow down, peruse again, Landscape Design IS this easy. Look at the 2nd pic again. Notice how much sky I own because of my walls? You would CRINGE knowing how many houses along the ubiquitous subdivision cul-de-sac lane (aka street) my garden obliterates in that 2nd pic. Who knew? Gardens are offense & defense. A moat of grace around home & life.
Posted by Tara Dillard at 8:59 AM 5 comments: Links to this post