Nancy Lancaster: A Layer of Timelessness with Fragrant Plants at the Windows

Haseley Court, below, one of the homes Nancy Lancaster lived in.
.
Joy, a jolt of boxes, below, clothed to the ground in proper pruning, instead of meatballs with naked feet.
.
Closer to the house, Nancy had a favorite scented plant combination for placement at windows.
. 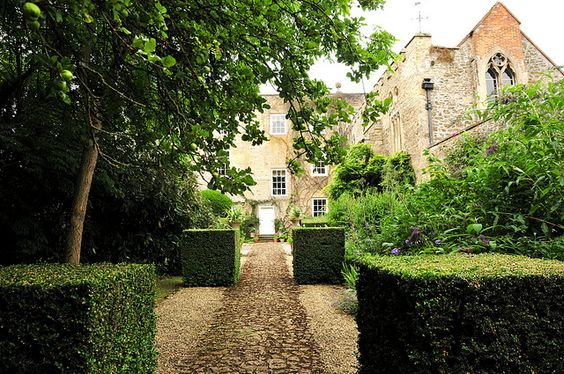 Pic, above, here.
.
"...Nancy's imagination was drawn to the details, the little medleys she or a guest might come across as they wandered the park.  As inside the house, every conceivable empty space was an opportunity.  More than in the grand parterre or the terrace, her taste for how a garden ought to be found in small compositions of delicious-smelling nicotiana, heliotrope, lavender, lemon verbena and sweet sultan underneath the windows of the house.  They gave Ditchley the personality she sought.  Spreading and drooping wisteria and jasmine on a wall or around a tree or a Gloire de Dijon rose climbing over a Portland stone pediment, were enlisted in taking a site that was somehow neither of today nor of yesterday and blessing it with an indescribable essence of passing time, time past and timelessness."  Robert Becker, Nancy Lancaster Her Life, Her World, Her Art.  (Yes, you want the book.)
.
Nancy's homes & gardens don't push me away, in the least, with their expensive maintenance, and too much stuff.
.
Fun is knowing how to take the best of Nancy Lancaster, keeping her garden drama, removing layers of maintenance, yet it's still pure Nancy Lancaster.  With nothing of '...today nor of yesterday and blessing it with an indescribable essence of passing time, time past and timelessness.'
.
How is it 'Nancy Lancaster' without all her garden layers?  She worked with the greats, and they never get lost in proper translations.  If they do, it's on us, not them.
.
Time.  Timelessness.
.
Timelessness is given by gardens, if we play our role correctly.
.
From a few quick notes, below, written last week, about a loving timelessness vs. someone else's horrid reality, on 2 small scraps of paper, from an article written by John Gray which included both Blaise Pascal and Marcel Proust, both men I've studied loosely thru the years.
.
If you've made your garden a timelessness proscenium you can go where Proust does, without effort, "Proust's detachment from the haute bourgeois society that is coolly dissected....  The core of Jozef  Czapski's  talks is Proust's portrayal, through his narrator, of the indifference to death that comes when the mind is filled with memories that seem to come unbidden from outside of time."
.
"Devoured by a yearning for the absolute, Pascal considered all the ephemeral joys of the senses unacceptable.  For Proust, on the other hand, only the world of the senses existed and had value."
.
"...as Pascal turns from the world with disgust, Proust seeks salvation in its fugitive sensations."
.
"Czapski was not mistaken in finding in Proust's work a kind of religion not a story of redemption, but a struggle to defy time & disillusion, and eternalize the passing moment in memories of meaning & beauty."  Almost straight from an E.M. Forster novel, Howard's End.
.
Czapski, "Born in Prague in 1896, a scion of an old and distinguished family, he graduated in St Petersburg before moving to newly emancipated Poland to take up his studies in art. He spent eight years in cosmopolitan prewar Paris, exchanging ideas with French and Russian artists and writers, forming passionate attachments with both women and men (including one with Vladimir Nabokov’s younger brother Sergey, who would perish in a Nazi camp where gay men were subjected to hideous medical experiments) and devoting himself to realizing a vision of painting he found pursued in the work of Cézanne."
.
Time.  Timelessness, a first choice in Garden Design.
.
Garden & Be Well,   XO T
Posted by Tara Dillard at 6:01 PM 4 comments: