Simplicity is the Best Garden Design

Tasha Tudor chose one of the most powerful quotes, as the sign off to her letter writing, Take Joy.
.
Take Joy.
.
Did you get it?  Had you already had the epiphany?
.
Doesn't seem possible.  Yet it's true.  Joy is always present.  'Take', is up to you.
. 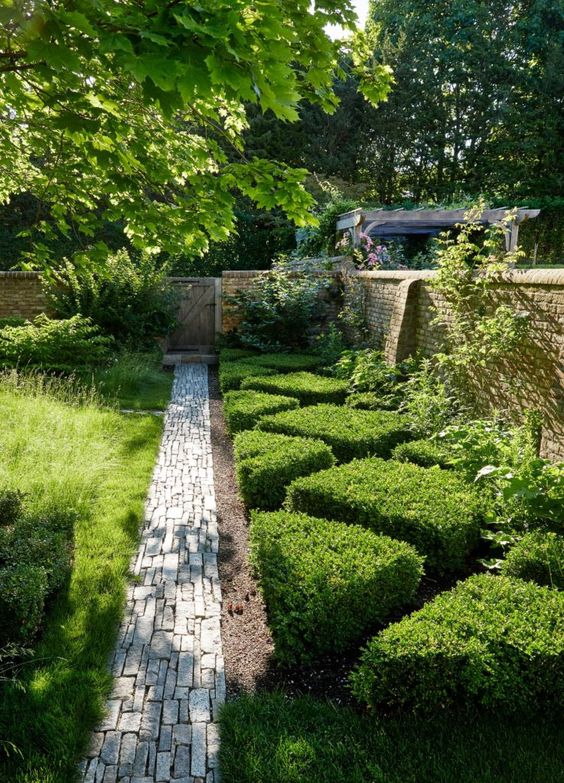 Pic, above, here.
.
Green Meatballs have irritated me for decades, then this, above.  How could I not laugh?  Apparently I adore green boxes and wedges.
.
Recognize the stone path, above ?  Variation of the centuries old stone wheelbarrow paths.
.
Hint of Tara Turf, above, too.  Meadows of Tara Turf, pure pollinator habitat.  Tara Turf under fruit trees historically named, guilds. 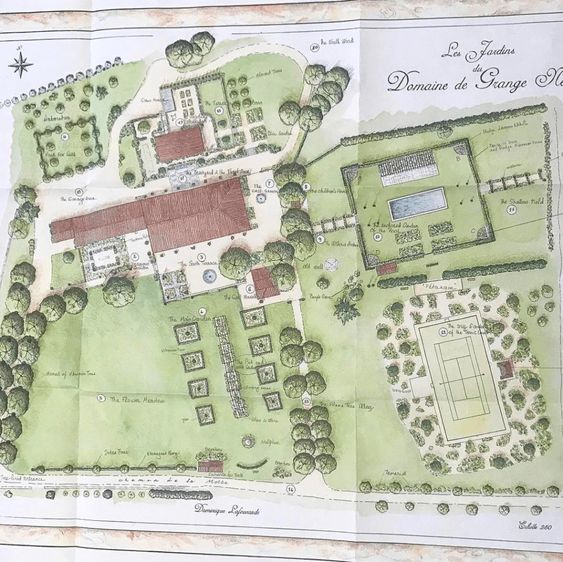 Pic, above, here.
.
Evergreens/trees, meadow, home, above/below.  Relationships.  Core connections.  House to garden, garden to Nature, us to garden, Nature to us.
.
At the front end, decades ago, I could not be this simple, above/below.  Not for me, I was still too special, knew so little, thought I knew something.  Now, the garden, above, reeks of sacred & scientific wisdom.  A gift from centuries of the best minds.  In conversation with us, if we'll listen.
.
Simple?  I see layers of complexity, above.  At the front end, for years, I saw none of the complexity.  Complexity?  Aka, layers of riches.
. 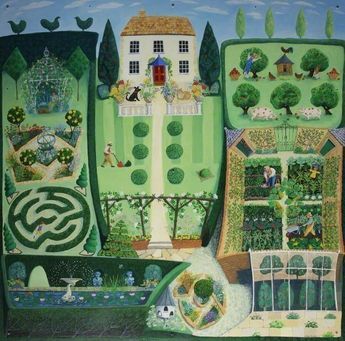 Pic, above, here.
.
Squished smaller, the meadow, below, is a brick terrace.  Variations on a theme.
. 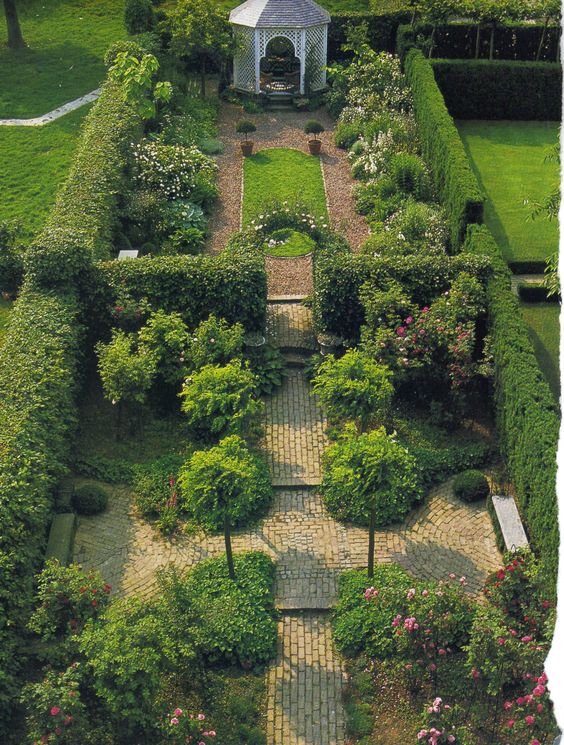 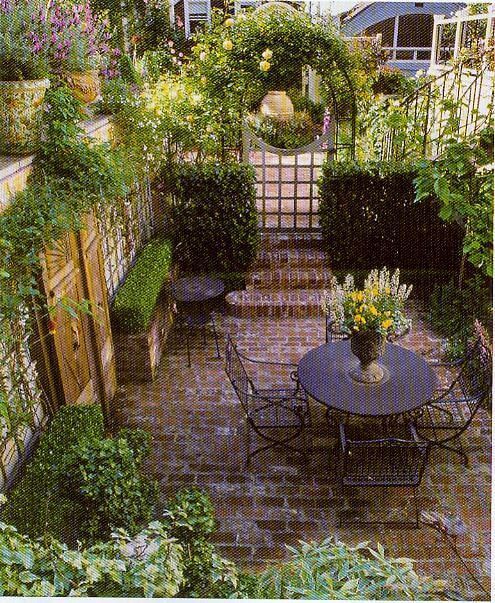 Pic, above, here.
.
In all seasons, below, these gardens delight.  Design your garden for February, and you've designed it for all year.  No matter the style of your design.
. 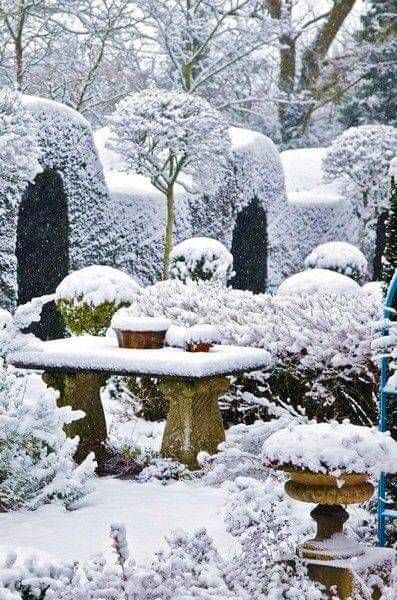 Pic, above, here.
.
Aside from natural affinities of placement, house to meadow, house to hedges, house to allees, which reign, I assess an odd secondary reigning power.  Furniture.  Where do you want to sit, where do you want to eat, where do you want to visit with friends, where do you want to nap, where do you want to read....?
.
Aside from the bonuses of complexity with gardening simply, these are the gardens going full measure, into age, theirs and yours, and into the Great Beyond*.  "Three chords, and truth.", as they described early Country music.
.
If you aren't sure about a garden this 'simple' it's apparent, they allow you to fill in, to a greedy heart's content, with flowers/flowers/flowers.  Begin with flowers/flowers/flowers, please do.  It's how I get the majority of my clients.
.
Simplicity of these gardens is a liturgy of Nature, if you see their complexity.  Nothing we have to do, everything done by Nature, for us.
.
"Nothing is ever solved. Solving is an illusion. There are moments of spontaneous brightness, when the mind appears emancipated, but that is mere epiphany."  Patti Smith
.
And I've been the epiphany hunter, for decades, in my garden.
.
"There’s no hierarchy. That’s the miracle of a triangle. No top, no bottom, no taking sides. Take away the tags of the Trinity — Father, Son and Holy Spirit — and replace each with love. See what I mean? Love. Love. Love. Equal weight encompassing the whole of so called spiritual existence."  Patti Smith
.
And I've broken layers of Garden Design into trinities, for decades.
.
"Just negotiating zones. No rules. No change. But then everything eventually changes. It’s the way of the world. Cycles of death and resurrection, but not always in the way we imagine."  Patti Smith
.
And I've had decades with little change.  Saturday, driving the Blue Ridge Parkway, a World Heritage Site, coming back, Beloved asked which way I wanted to go.  Another highway or the Blue Ridge Parkway again.  Depths within answered, "What is first will be last, and what is last will be first."  Oddly, Beloved got it & he's not normally Metaphor Man.
.
Benediction, returning, along the Blue Ridge Parkway.
.
“The grounds for hope are in the shadows, in the people who are inventing the world while no one looks, who themselves don’t know yet whether they will have any effect…”  Rebecca Solnit
.
Hope is like joy, it's always there, if we take.

“You too have come into the world to do this, to go easy, to be filled with light, and to shine.”  Mary Oliver
.
We have great help along the way, with unseen partners, heroes, liberators, teachers, lovers, and none must necessarily be human.  Gardens do this.  Whether you think so or not.
.
For better and worse, growing up, my dad was an engineer, part of a team of 50 great engineers first to put man on the moon.  Will never forget something he said about electricity, "We know how to use electricity, but we don't know what it is."
.
His lone sentence, about electricity, informs beyond its basics, if you take it to.
.
Recently, discovering trees use electrical current, no different than we have pulsing in our brain or heart, to communicate, I knew, finally, my communicating with gardens wasn't merely feel-good-mumbo-jumbo, nor one-way.  Science caught up, to what Garden Whisperers have understood from birth.
.
"Yes, trees are the foundation of forests, but a forest is much more than what you see… Underground there is this other world — a world of infinite biological pathways that connect trees and allow them to communicate and allow the forest to behave as though it’s a single organism. It might remind you of a sort of intelligence."  Suzanne Simard
.

From Brain Pickings, "Simard, whose research was foundational to German forester Peter Wohlleben’s wildly popular book The Hidden Life of Trees: What They Feel, How They Communicate, discusses her work and the improbable path that led her to it in her wonderful full-length TED talk: "

All profound, Tara. Thank you.

All profound, Tara. Thank you.

Have you seen Judi Dench: My Passion For Trees?

It's almost sacred when she comes face to face with a 1500 year old yew tree!