She called Jan. 14, 2006, David died, How do I get permission to sprinkle David's ashes at Kistner Center? Turning my chair toward the window, I saw my garden for the first time. Until that moment, proclaiming to clients, students, friends, and worse myself, I've done all my own gardening.
.
Tears spurted like cartoon characters. Turning from the window I had to leave my office. Walking into the library a window, more David. A 2-story house of windows, and David. I ended up in the tiny guest bath, no window, curled on the floor almost unable to breath and those ridiculous cartoon tears. Knowing I had to get outside, into the garden. Quick. 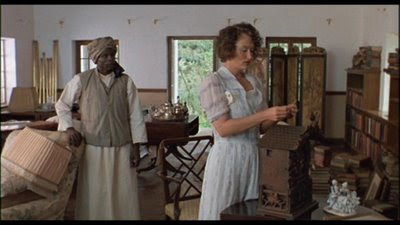 David was in a class, 1990, I taught at the local college. He was the only student with a total YES attitude. Gardening is about doing things you've never done before while getting bruised, bloodied, stretched (physically/mentally), bitten, dirty, sweaty, cold, rained on, slipping, falling from ladders, and more.
.
David installed my landscape designs until he died. Along the way he acquired his weekly Harem. Each day of the week devoted to a woman and her garden. All were at his funeral.
.
David worked with me in my garden, helping create it, for almost 2 decades. Why didn't I know that? David did every bit of gardening I wasn't strong enough for. Large plants, heavy stone, maintenance when it got out-of-control, spreading 30 bails of pinestraw at a time, using power tools I wasn't comfortable with.
.
David worked from sunrise to sunset. It's what I needed but never asked for; David understood. We rarely spoke in the garden but there was always the 1 hr. lunch. Speaking of much but gardening. David loved COLLEGE BOY's cooking.
.
The evening before David arrived I walked my grounds. Laying in bed I hand-wrote a garden list. Re-writing it several times to get the priorities correct. Making a 2nd copy for David. When David knocked I handed him the list & a cup of coffee. We walked the grounds in silence.
.
Finally, David would speak. Mentioning things I hadn't noticed and tweeking the list. Then we got started. That's all there was to it.
.
When David worked I never watched over his shoulder. David would come to me, wherever I was working in the garden, and with non-verbal communication I knew to go see what he had completed. Mostly I smiled, sometimes made changes, & one occasion had a meltdown.
.
Before one Winter Open Garden (David always worked the day before my open gardens) it was raining at 33f. COLLEGE BOY asked if David was going to work in the garden, Have you called David? Indignant, Of course David is coming. David arrived, in a rubber poncho, sunrise-sunset, working in 33f rain (that was the hi). David was, indeed, a YES person.
.
On occasion I did have garden emergencies. Calling David, knowing he would not refuse, and knowing a Harem garden would suffer. What David told them? I'm sure it wasn't, Tara needs me today.
.
David was in a couple of segments on my TV show on CBS. Pictures of David's garden are in my Garden Paths book. David died before the book was released. I was waiting to surprise him.
.
Walking from the guest bath to my garden, still those stupid cartoon tears, having realized what David was, fully, in my life, was a slog as though air was mud. Making one of those ridiculous emotional prayers, hot, childish, of the moment, Please God let me know something, anything, give me a sign, I've got to know David is with you.
.
In my garden cartoon tears fell as I began to work, coming to terms with losing David. The first handfull of debris I picked up, clearing out under the dwarf Indian hawthorn, stopped me and the tears. Looking down, cupped in my hands was a perfect bird's nest. The circle of life. I had never found a bird's nest in my garden before. 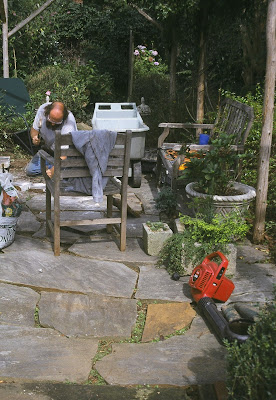 David Stevens, above, working in my garden. His ashes are at Kistner Center. Mary Kistner left her property as a public nature preserve and had been my client/friend/mentor and one of David's Harem. Her ashes are there too.
.
Garden & Be Well, XO Tara
.
Top photo from the movie, Out of Africa
Posted by Tara Dillard at 9:38 AM

Tara, what a truly beautiful post. I was unbelievably moved reading about such a clearly amazing person who meant so much to you.

T, sorry for your loss, but glad you wakened to David's contribution.
AND you used a pic from one of my all-time favorite movies - one of the best scenes of the movie was at the end when Karin(sp?) was leaving africa - she says to her manservant - 'I want to hear you say my name!' - the thumb

ps i do have more than one gardenlarder - trunk of car, tool shed, garage, back porch, mudroom closet etc