How to Stage Small Potted Plants With Your 'Sacred Fire'

In 1781, Thomas Jefferson wrote,
"Those who labour in the earth are the chosen people of God, if ever he had a chosen people, whose breasts he has made his peculiar deposit for substantial and genuine virtue. It is the focus in which he keeps alive that sacred fire, which otherwise might escape from the face of the earth."
Thomas Jefferson
Quote, from, Here.
.
Hadn't seen this particular quote, above, until today.  I think we're all born with that 'sacred fire', a few in any given century, keep & stoke that 'sacred fire'.  You are one, reading this far.
.
Jefferson's belief, above, quite dangerous, still, to world governments.  (Why think small?)  Taking the privilege of toiling, poyeema, with the Earth, provides more than food for the body.  Working with the soil, feeds epiphanies to the soul.  Each era garners this truth; we each have the gift of inalienable rights, from Providence.
.
Filthy lucre is not part of this transaction.  Free to all; for the taking.  Tasha Tudor signed off many of her letters with a part of this 'sacred fire', Take Joy.  She knew, Joy is always present.  It's our job to 'take'.
. 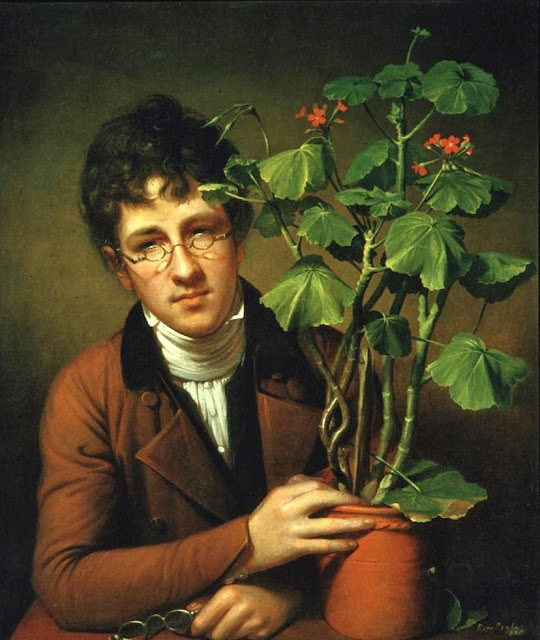 Pic, above, here.
.
Painted, above, by Rembrandt Peal, ca. 1801, there is no loss of desire, for this geranium, and its pot, ca. 2020.  Why is that?  I must have both.  Oddly, the geranium, tall, does not look staked.  How is it not weeping over?  Ironically, the pot looks artisan made, ca. 2020.  How I want to know the pot by touch, the geranium too.  What is the fragrance of this geranium?  May I lightly touch its leaves, and their scent remains on my hands?
.
What is their soil mix, how does it smell?
. 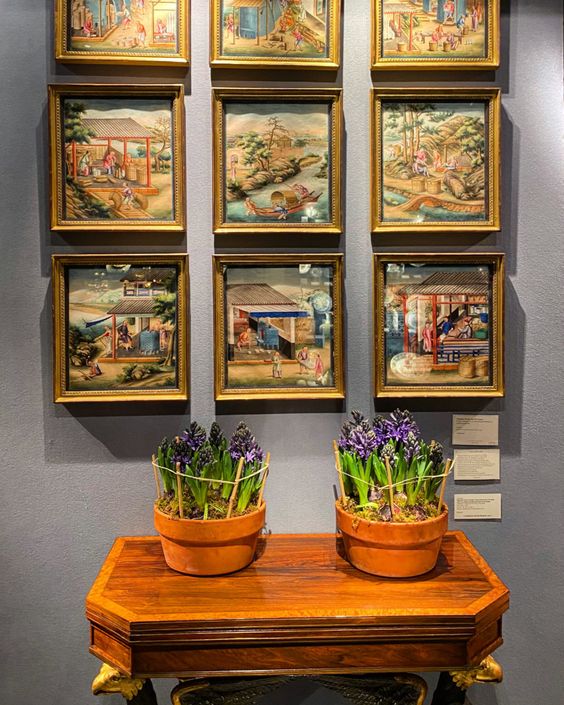 Pic, above, here.
.
What happens without 'sacred fire' ?  This, at a museum, above.  (Macro thoughts about 'sacred fire' in the opening, taking it to micro thoughts for the closing.  Sacred-fire-cares-not, large/small, it burns bright, in love.)
.
No soul, above, with Jefferson's 'sacred fire' to make the pots/flowers a setting for the art on the wall.  Somewhere along the way to the museum, these poor bulbs were smashed sideways.  Grocery stores are better at display.
.
Further, what's with those sticks/string, above ?
.
Sticks should be dark twigs from tree or shrub, and string a dark jute twine.  Hyacinths don't need staking, and if staking is done, it should be created with as much 'sacred fire' as the paintings were created, and hung, on the wall.
.
Are those pots, above, set bare on the table?
.
Pots could be placed on terra cotta saucers, or a pair of Chinese plates, from the museum collections, creating a scene to partake with the art on the wall.  They are definitely not positioned properly.
.
Garden & Be Well,  XO T
.
One of my mentor's, Mary Kistner, had her memorial service at a museum.  It was standing room only.  An artist, several mediums, Mary had a special talent for hanging/displaying other artists work, for many museums across USA.  Hence my thinking museum art displays are quite-a-thing.
.
How quickly did you realize the potted flowers had been smashed in a mishap?  Before, or after, you looked in amazed curiosity at the sticks/string?  Did neither register, only part?  Now that it's pointed out, do you realize why it is important to point out?  "...men come to build stately sooner than to garden finely as if gardening were the greater perfection."  Alexander Pope, ca. 17th century.
.
How I would love to see what Mary would do with this art display, above.
.
Mary was about 4 decades older than me, and from first meeting I was moth to her Sacred Flame.
Posted by Tara Dillard at 10:20 AM

Whenever I see a pot on a table without a saucer I suspect it is just temporarily staged. I did not notice the hyacinths were smashed or realize the string and sticks were wrong, just thought it was a new trend. You continue to show me things I would never have otherwise noticed, Tara!

I read in a 1938 magazine the other day that terra-cotta was first made in Tanagra in Boeotia, Greece. They supplied all the Mediterranean basin with terra-cotta products. I wrote my friend Poppy who lives in Crete about it and she was going to find out more about the Tanagra figurines made from it that are in museums, wondering if it was from the same age as the Minoan pottery that was from her area.

The blog link of the Peal portrait is interesting!